Following the publication of our prior study (Murman et al., 2014), the LETS program was acquired and adapted by the nonprofit organization Bring Change to Mind (BC2M). BC2M’s goals included expanding the antistigma high school club program into Northern California and beyond, and conducting a trial of its efficacy/effectiveness. As before, school clubs were student initiated, allowing students to design and engage in discussions and club activities to foster empathy, compassion, and social action with the aim of enhancing humanization and reducing the stigma of MI. In 2015–2016 and again in 2016–2017, BC2M staff engaged high schools, soliciting interest in the school’s formation of an antistigma club. At all schools, the club required sponsorship by an advisor (faculty or staff member). A sequence of club activities in the BC2M-produced guidebook included having discussions on various topics related to MI and stigma, ideas for fund-raising, educational videos and activities, social media activities/campaigns, and volunteer/community outreach activities. Additional activities could include creating flyers and engaging with other students at school during mental health awareness week/month, presenting information at school-wide assemblies or via bulletins/school-wide announcements, formulating recruitment activities to increase club membership, organizing therapy animals to visit the school, and facilitating activities within the larger community (e.g., participating in suicide awareness walks). BC2M staff and board members were involved in establishing and monitoring clubs at each high school. Research staff at the University of California, Berkeley obtained consent/assent for student participation, collected measures, conducted data analyses, and assisted in writing the present article. 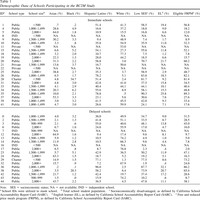 Publicly accessible data were utilized whenever possible; information for some private/independent schools was not available. A total of 42 schools participated in the present study. Of these, 34 were public (N = 638 students), three were private (N = 36 students), three were charter (N = 25 students), and two were independent (N = 32 students). School student-body populations ranged from 150 to over 3,000. Because schools were recruited from diverse counties in Northern California, school-wide demographics varied considerably. For example, across schools, the percentage of White students ranged from 1% −77%, the percentage of Hispanic/Latinx students ranged from 7%-96%, and the percentage of students eligible for a reduced-price lunch ranged from 2%-89%. Most clubs met either weekly or biweekly; three clubs met monthly, and one met every 2 months. The lowest N of club participants from any school was 4; the highest, 49 (M students per club = 17.4).

School clubs in the study were assigned into immediate versus delayed conditions. All schools established BC2M clubs at the beginning of fall term: clubs in the immediate group started engaging in club activities and had regular club meetings in the fall, whereas clubs in the delayed group were instructed not to engage in club activities until the winter term (generally starting in late January or early February), except for organizational sessions without MI-related or stigma-related content. Forty-eight schools initially established BC2M clubs during the study time frame. All schools establishing a BC2M club were invited to participate in the present study. Of those, 46 initially agreed to participate; the remaining two school clubs did not want the possibility of postponing club activities until winter.
Instantiating a matched-pair, cluster-randomized design, study staff matched schools based on overall school size (N of student body), public versus “other” school status, student body diversity (as indexed by the proportion of Hispanic youth), and the percentage of the student body receiving reduced-price lunches. For example, two large urban high schools with high diversity and relatively high socioeconomic disadvantage could form a pair; two smaller parochial schools could form another pair. Paired schools were then randomly assigned to the immediate (n = 23) or delayed (n = 23) conditions. However, four schools declined to participate in the study after being assigned to the delayed condition, so the final count of immediate and delayed schools was 23 and 19, respectively.
All participating school clubs completed evaluations at three time points: (a) in the fall of the school year, during the first or second club meeting (Time 1 [T1]); (b) in the winter (Time 2 [T2]), at the start of the delayed clubs’ activities; and (c) in the spring (Time 3 [T3]), near the end of the school year (usually May). The time between each evaluation was 3 to 4 months. For these evaluations, trained research assistants visited each high school during a regular club meeting time (generally lunchtime), brought food for club participants as an incentive, and administered/collected study measures. The evaluation included both closed-ended, quantitative measures and open-ended qualitative questions (the latter will be the subject of an additional report). The battery took about 30 min to complete. Each participant received $10 for completing the evaluation at each time point. For all students under 18, parents were required to provide signed permission for students to participate in the study; students also provided their assent (the few students aged 18 years or above were able to provide their own written consent). Full approval for the study was provided by the University of California, Berkeley’s Committee for Protection of Human Subjects.

In total, 731 high school students (75% female) participated across the 42 school clubs in the study and completed measures during at least one time point (M = 17.4 students per school). Six-hundred thirty-eight students were from public schools, 36 were from private schools, 25 were from charter schools, and 32 were from independent schools. This overall sample was diverse: 36% reported that they were White, 20% Asian American/Pacific Islander, 20% Hispanic/Latinx, 2% African American, and 16% mixed/other, with 6% declining to report. In terms of class standing, 15% were freshmen, 21% sophomores, 37% juniors, and 27% seniors. Table 2
TABLES AND FIGURES

Of note, students at each school were allowed to join the BC2M club (and the present study) at any time during the school year, as long as they provided necessary consent/assent. However, only students who provided information at baseline (T1) were included in the present analyses (N = 545). This data-analytic policy was enforced to ensure that information from students in the immediate condition was gathered before they were exposed to club activities (prior to the T2 data collection visit), and similarly, to gather data from students in the delayed condition before they engaged in club activities prior to starting club activities at T2. As for missing data, students who were lost to follow up after T1 (N = 224) showed slightly but significantly more stigmatizing scores on baseline Social Distance (M = 4.14 vs. M = 4.25, p = .027) than those who continued.

The quantitative scales and psychometric properties utilized are based on data from Wahl and colleagues (Wahl, Susin, Kaplan, Lax, & Zatina, 2011; Wahl, Susin, Lax, Kaplan, & Zatina, 2012), as well as our prior study (Murman et al., 2014).

Two Dates and A Dash