We know that mental illness/disorders do not discriminate based on race, colour, age, socioeconomic status, gender or identity. Anyone can experience a mental illness/disorder; however, minority communities such as African Americans, Hispanics, Native Americans/Alaska Natives, Asian Americans to name a few, usually experience more severe forms of mental health problems due to unmet needs, socioeconomic disparities, racism and cultural influences.

Mental illness in Native Americans/Alaskan Natives was discussed in Blog #23. Today, in recognition of African American History month or Black History month as it is known in the United Kingdom, I will explain some of the challenges African American children and teenagers experience when living with a mental disorder.

Approximately 13.2 percent of the US population (42 million) are African American. Of those, 16 percent had a diagnosable mental disorder in the past year, yet only 1 in 3 received appropriate care and support. Mental health research on children and youth, have found that African American children and teenagers have higher rates of OCD (obsessive compulsive disorder), depression, and conduct disorder than Caucasian children/teenagers. Sadly, African American children and teenagers frequently do not seek or receive treatment for their mental disorders due to stigma and the community’s misunderstanding of mental illness/disorder. Consequently, the suicide rate among children ages 5 to 11 years old has increased significantly and youth suicide attempts have increased 73 percent between 1991 and 2017 (Trends of Suicidal Behaviors Among High School Students in the US).

From earlier blogs, we learnt that brain growth and development is influenced by genetics, early environment, and current environment. Risk factors for a child/teen developing a mental disorder include family history, traumatic brain injury, bullying, family history of suicide and ACEs (adverse childhood experiences) such as abuse, neglect, maltreatment. Children and teenagers from impoverished, homeless, incarcerated and/or substance abuse families, are at a significantly higher risk for mental illness.

On August 28, 1963, Martin Luther King Jr. delivered his iconic speech, I have a dream in which he spoke of lifting the nation from the quick sands of racial injustice… that all men are created equal …that my four little children will one day live in a nation where they will not be judged by the color of their skin but by the content of their character. We have come a long way since then, however, in the past few years, it seems that racism and segregation of all minority groups has reared its ugly head once again.

There is an intricate connection between the mental health of African American children/teens and the social, political and economic policies and conditions of society e.g. inequities in education, economic disadvantage, lack of access to health care all impact a child/teenager’s ability to lead a healthy and productive life. Other factors that play a role include:

Misunderstanding about Mental Illness
Many African Americans believe that mental illness is a punishment from God or a personal weakness and this leads to feelings of shame and helplessness. Unfortunately, this misunderstanding only perpetuates the stigma associated with mental illness. Research has shown that the ways in which African American kids express emotional distress has resulted in many kids being misdiagnosed e.g. more kids are diagnosed with schizophrenia even when experiencing symptoms related to mood disorders or PTSD.

African Americans typically have pre-set beliefs related to stigma, psychological openness and help seeking. Research indicates that the African American community believes that mild depression or anxiety would be considered ‘crazy’ in their social circles and that discussions about mental illness is not appropriate, even among family (Williams, 2011).

Faith, Spirituality and Community
Family, community and spiritual beliefs tend to be a source of strength and support. Research has found that many African Americans rely on faith, family and social communities for emotional support and do not seek medical help, even if needed. African Americans prefer to use complementary therapies to treat emotional problems. For example, prayer is used as a method of dealing with life stressors and emotional problems, holy oil and other home remedies are taken to stop feelings of sadness, anxiety, fatigue.

Inequality of Care
According to Jamila Taylor, Director of Health Care Reform and Senior Fellow (2019), the American health care system is beset with inequalities that have a disproportionate impact on marginalized groups. These inequalities contribute to gaps in health insurance coverage, uneven access to services and poorer health outcomes. African Americans bare the brunt of these health care challenges. To further compound the issue, wealth in the US is also unequally distributed by race, particularly between white and black households.

Reluctance/Inability to Access Mental Health Services
Contributory factors include distrust of the healthcare system, residential segregation, lack of insurance and lack of culturally competent providers who are African American.

Racism
A study published in the journal of Psychoneuroendocrinology found that racist experiences bring on an increase in inflammation in African Americans. As mentioned in earlier blogs, inflammation of the brain and body, not only increases the risk of chronic illness, but also of developing a mental disorder/illness. Other studies support this hypothesis and found that life stressors related to racism, poverty, inequality, crime, etc. resulted in repeated exposure to toxic stress and increased inflammation in the brain/body pathway (please see blogs 1,2).

As we can see, diagnosis, treatment, education and management of mental disorders in children and teenagers is complex and multifaceted. Changes to policies and healthcare must be implemented from a government and local level and must have the support and inclusion of the African American community, places of worship and schools. For change to be effective, an understanding and awareness of historical trauma, religion and African American culture is key. There is no easy solution, but as Martin Luther King Jr said,

“I say to you today, my friends,
that in spite of the difficulties
and frustrations of the moment.
I still have a dream.”

Dementia Aware: what you need to know about delirium in the person with dementia   Delirium is a serious illness and can be experienced by anyone, at any age. However, the senior population are more susceptible to delirium and it is estimated that approximately 30-40% of most people with dementia

Another Great Review on Amazon UK

Judith Barry 5.0 out of 5 starsEducational, informative, bravely and beautifully written. 15 July 2018 Format: Paperback|Verified Purchase A powerful and beautifully written book. Difficult to read in places because the authors experience of depression is so vividly described., there were points when I had to stop reading and 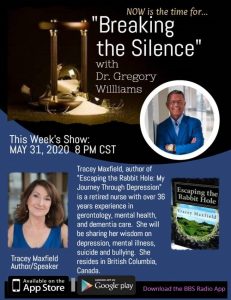 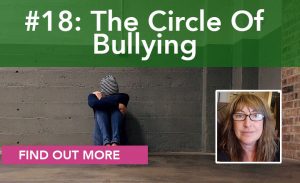 To truly understand the bully experience, it is important to understand that bullying may not be confined solely to the bully and the victim. Other key people may be involved, some in an active role and others in a passive role and researchers refer to this phenomenon as the ‘circle