What you need to know about Oppositional Defiant Disorder (ODD) and Conduct Disorder (CD) in children and teenagers.

We’ve all watched television programs about children and teenagers who are ‘out of control’ and sent to wilderness camps or military camps to ‘mend their ways,’ and I am sure many of you commented that the parents or school was at fault and all the teenagers needed was discipline and rules to follow.

But, is it really that simple?

Is the behaviour a negative response to a troubled environment, or a learned behaviour, or is there more going on? What if these kids actually have a serious mental illness/disorder? Did you know that oppositional defiant disorder (ODD) and conduct disorder (CD) is increasing rapidly amongst children and teenagers with an estimated 10 to 16 percent of kids ages 8 to 15 years old living with oppositional defiant disorder and up to 4 percent of kids, mainly males, ages 9 to 17 years old living with conduct disorder.

Oppositional Defiant Disorder (ODD) is a type of behaviour disorder which usually emerges during early elementary school. If left untreated, it can lead to conduct disorder, a much more serious behavioural disorder. The signs and symptoms of ODD include:

According to the DSM-5 (Diagnostic and Statistical Manual of Mental Disorders, 5th edition) for a diagnosis of ODD, the child/teenager must have experienced these symptoms for at least 6 months. ODD can be mild: occurs in one setting only e.g. home or school; moderate: symptoms occur in two or more settings e.g. home and school, and severe: symptoms occur in three or more settings e.g. home, school, sports club.

Whilst researchers do not know the exact cause of ODD, the general consensus is that it occurs due to a combination of two factors: genetics and external environmental. Influences such as abuse, neglect, lack of parental supervision/involvement, harsh or inconsistent discipline, living with a parent with a mental illness and/or substance use disorder all increase the likelihood of a child/teenagers developing ODD. To further compound the issue, many children/teenagers presenting with these behaviours, also have another mental illness such as ADHD, emotion disorder, anxiety disorder, learning or communication disorders.

A child/teenager with ODD will encounter many challenges in day to day life, as his/her behavior will likely impact everyone.

There is no cure for ODD, however, like many other mental illnesses, with therapy and consistent strategies the disorder can be managed well. Potential risks of untreated ODD include substance use, engage in risky behaviours and/or criminal behaviour e.g. vandalism, shoplifting, and suicide and development of the more serious and disturbing conduct disorder (CD).

Treatment options for ODD include:

Conduct Disorder (CD) is a serious behavioral and emotional disorder and is characterized as a callous disregard for and aggression towards others, from pushing, hitting and biting in early childhood to bullying, cruelty and violence in adolescence* (Child Mind Institute, 2019). Researchers believe there is a possible impairment of the frontal lobe in CD, which impairs a child/teenager’s ability to learn from negative experiences and adjusting his/her behaviors. If left untreated, this disorder often develops into antisocial personality disorder in adulthood and possible psychopathology. CD is difficult to overcome; however, the sooner treatment begins, the better the outlook for the child/teenager.

Risks to developing a Conduct Disorder:

A teenager with conduct disorder will usually present as aggressive, highly irritable, reckless with poor self control, fearless, ruthless, a low tolerance for frustration and will frequently misinterpret the actions of others as threatening and/or interfering. The child/teenager will also be a master manipulator, unable to show love or compassion and any attempts at discipline or punishment are completely disregarded and ignored.

Signs and symptoms of CD:

For a diagnosis of CD, the child/teenager must exhibit a callous disregard for others and continual behaviours that fit into the following categories:

Treatment options for CD are long-term and may include:

What can parents do?
Set up a daily routine and set clear limits. Praise for positive behaviour and show love. Model and promote healthy behaviours, be very patient, and do not overreact to challenges (see ODD).

Could your child/teenager become a psychopath?

The general consensus is that a combination of genetics and nurture i.e. home life, adverse childhood events, can all contribute to the likelihood that a child/teenager will develop conduct disorder or psychopathic tendencies.

For decades, experts claimed that there are no child psychopaths, however, they did agree that a child/teenager who does not receive treatment for conduct disorder and exhibits violent characteristics, is unsympathetic and very mean (spiteful and vindictive) is at an increased risk for developing psychopathy as an adult. As discussed in previous blogs, the human brain does not fully develop until age 21 to 24 years in females and age 24 to 27 years old in males. There is no standard test for psychopathy in children and many experts believed that an accurate assessment could not be conducted until the brain is fully developed.

To determine if someone is a psychopath, there is a very specific assessment, the PCL-R (Psychopathy Checklist Revised) which evaluates a person for 20 specific traits ranging from glib and superficial charm, pathological lying, manipulativeness, grandiose sense of self, juvenile delinquency and early behaviour problems. Psychopaths make up about one percent of the general population with approximately 25 percent of male offenders in correction centres. An important point to remember is that not all psychopaths are criminals (Jeffrey Dahmer, Ted Bundy, Paris Bennett), some function very well in society e.g. James Fallon.

Recently, however, a growing number of psychologists claim that psychopathy is a distinct neurological condition that can be identified in children a young as five years old. Crucial to the diagnosis are very specific callous and unemotional traits which they believe help distinguish “fledgling psychopaths” from children and teenagers with conduct disorder.

In 2016, Rebecca Waller, who conducts research on socioemotional development, child psychopathology, moral and antisocial behaviours and personality development at the University of Michigan found that early signs of psychopathy can be seen in children as young as two years old. The main conclusion from the study determined that parenting style can help children who exhibit some traits of early psychopathy.

Of course, these research findings have received a lot of criticism with many experts claiming that screening children will lead to labelling and potential exclusion of child and family in school, community, etc.

We are still a long way from implementing psychopathy screening in children and teenagers but given the behaviours and potential risks to self and others, I believe the test results could assist the child/teenager and family to rewrite his/her history by developing more positive, social, emotional ways of relating to others, and I think every child deserves a chance. *www.childmind.org

PrevPrevious ArticleBlog #4: Non-Suicidal Self Injury (NSSI) in Children and Teenagers
Next Article#6 The impact of social media on mental illness in children and teenagersNext

The Melancholy Condition with Darius Velasquez

Happy international women’s day! I’m honor of the special day, find some time to listen to the most recent episode of the podcast with Tracey Maxfield @engage.educate.empower, we talk about her experiences with helping children face depression & suicidal thoughts. Talk about making a difference at the right time. . 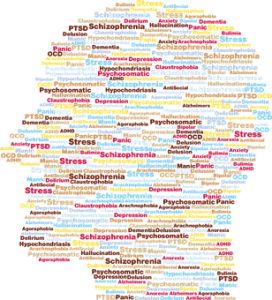