Eating Disorders in Children and Teenagers

It is important to understand that eating disorders are not solely confined to food issues but are usually due to a range of psychological conditions that cause unhealthy eating habits to develop e.g. obsession with food, delusions, anxiety, fixation with body image, substance/alcohol use. Untreated eating disorders can lead to some very serious medical problems and research is finding that an eating disorder rarely exists in isolation but is usually accompanied with other mental disorders/illnesses e.g. depression, anxiety, substance abuse.

Eating Disorders and Self Harm
Approximately one quarter of children/teenagers with eating disorders self-harm. Self harm is often thought of as ways to escape, avoid or regulate aversive emotional states (Buckholdt et al., 2015). Unfortunately, as both behaviours appear effective in regulating emotion in the moment, it is very difficult to stop.

Of interest, eating disorders appear to be almost non-existent in cultures that have not been exposed to western influences and social media.

Eating Disorders in Children
Most children with eating disorders have more atypical eating disorder symptoms compared to teenagers and adults. Common reasons for food problems include a fear of getting fat, fear of stomachache, vomiting, choking, aversion to taste, smell and texture of foods. In addition, many children can have pre-morbid anxiety symptoms which can exacerbate their fears whilst others may develop OCD like behaviours which can further restrict food intake and obsessions. Children often present in behaviorally regressed states displaying:

The most common eating disorders in children are anorexia nervosa (AN), avoidant/restrictive food intake disorder (ARFID) and eating disorder not elsewhere classified (EDNEC).

Treatment of children is primarily behavioural and focuses on rewards and consequences related to ensuring adequate nutritional intake and management of maladaptive behaviours. Medical monitoring of a paediatrician and ongoing follow up with a dietician and child psychologist is essential. Due to issues of frequent episodes of behavioral regression, treatment of children is usually long-term.

This is the most well-known eating disorder and usually develops during adolescence and young adulthood, although research is showing that children as young as 7 to 8 years old have anorexia nervosa.

Treatment for anorexia is very specialized and sometimes hospitalization and/or artificial feeling may be required. Long-term treatment involves dealing with psychological issues: behavioural therapy, psychotherapy, support groups, family counselling and medication such as an antidepressant.

Bulimia tends to develop during adolescence and young adulthood. In bulimia, unusually large amounts of food are eaten. The food is usually of high fat and sugar content. After eating, the food is then purged to relieve abdominal discomfort and get rid of the excessive calories consumed.

Treatment aims to break the binge-purge cycle and may include nutritional counselling, therapy, behaviour modification therapy and possibly an antidepressant medication.

Whilst similar to bulimia, there is no vomiting after eating a very large meal. Binge eating is usually indicative of a child/teenager who is struggling with managing his/her emotions and is usually due to lots of stressors in life e.g. bullying, abuse, abandonment, etc.

A child/teenager who has binge eating disorder requires intensive counselling, which may include behavioural therapy and psychotherapy. Nutritional counselling, plus a supervised weight loss plan and exercise program is also an essential part of the treatment plan.

What Can a Parent(s) Do?

The most important thing a parent can do is to talk with and listen to your child/teenager’s concerns, fears, etc. Sit close, make eye contact, look at the body language, offer a caring touch or hug. Hear what is being said, or not being said (silence can speak volumes), be non-judgemental and open minded, do not invalidate or laugh, be responsive not reactive. Avoid comments like “you are too thin,” “you need to eat more,” “You are thin enough”.

Once you have spoken with your child/teenager, the next step is to schedule an appointment with a doctor for an assessment and physical examination. Medical monitoring by a pediatrician and psychiatric support is essential as is consultation and ongoing follow up with a nutritionist, counsellor/psychologist. Consider Family Based Therapy which helps parents take charge of nutrition decisions, gain skills in meal support and supervision and management of food avoidant behaviors and anxiety. Other tasks include following up with the school, talk with child/teenager’s siblings and any family/friends who play an active role in your child/teenager’s life and most importantly implement and adhere to the treatment plan 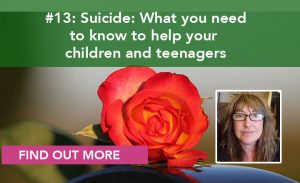 Suicide: What you need to know to help your children and teenagers

﻿ Each year several people are faced with the reality of living with a mental illness. That is why the month of May is designed to encourage people to talk about a subject that often has a stigma attached to it, so those who need help can get help. On

Dementia Aware: what you need to know about the 5 most common types of dementia   Dementia is an umbrella term that describes a progressive neurodegenerative disease causing deterioration in all areas of mental ability and function, accompanied by changes in behaviours and personality. Whilst dementia mainly affects older people,